THE IMAGINATION LABORATORY  is the generic name of our on-going funding strategy. All donated and funded income is put directly into projects that go further and deeper into providing imaginative and expansive creative experiences for young people; particularly in primary schools. 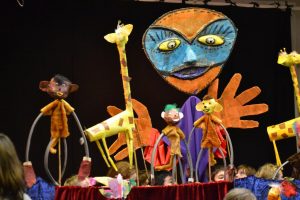 The first couple of years of Creation Myth Puppets as a charity were about ensuring that our organisation was solid. We built our artistic capacity and delivered more residencies. After the first two years, we felt it was time to launch a bid for funding to: 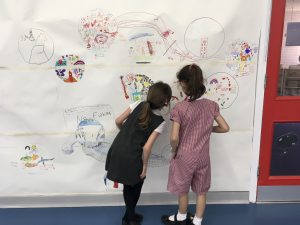 Our first funded project was called Kindling and our next one will be called FirstPerson Plural.

KINDLING
We applied to Arts Council England and were successful in a bid to work in three schools. Part of the success of our bid was generously supported by a crowdfunding campaign. We worked with over 1200 children in three primary schools in Cambridge, Exeter and Corfe Mullen. In each school the children and staff decided upon an issue that they wanted to make a show about. They chose the physical environment of their school, their school values and how they learnt in their school.

In each school used different methods to create story that involved all the children in the school. In each school, children ran workshops for each other employing the Mantle of the Expert – a dramatic technique by which children are enabled to guide their own creative learning.

Capsule Research evaluated all three projects. And something one child said in a focus group capture our imaginations for our next initiative. The child, asked how participating in the project made her feel, wrote, “ Far more than happy.” What is it about this type of imaginative engagement that is joyful? 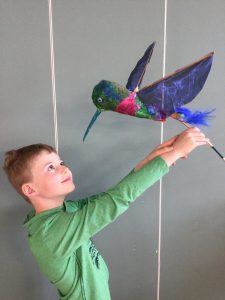 FIRST PERSON PLURAL
This project is going to focus on two schools in an area of high economic and social deprivation. There are two primary schools in the same area and same federation with 700 children in total. There is a perceived need to bring the two halves of the community together. We will take an existing myth and guide the children to make it contemporary and relevant to both halves of their community. The children with then construct, write, rehearse and perform their show, which may well set a new world record for The Biggest Amateur Puppet Show on Earth and end with a procession between the schools.

The other dimension to the project is a follow up creative installation made by the children that expresses how making the show from beginning to end made them feel and why they think it made them feel like that. We will accompany this process with the making if a short documentary film and some professional evaluation so that we have built on Kindling, have created legacy for the school and the company and have a platform for the next project.